Popular Sasan Gir weekend tour package for 2 nights 3 days. Gir holiday tour is for people who enjoy forests, wildlife and has an interest in different species of exotic flora and fauna of Gir Forest. 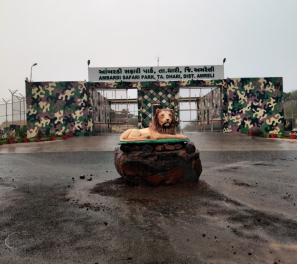 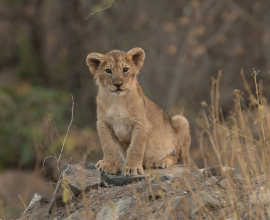 from Rs 7500 Per person on Twin Sharing
Details Book Now 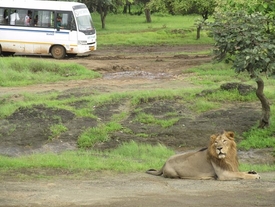 Gir Interpretation Zone - Devalia Closed Bus Safari for 30 minutes. This safari is best for big group who are mainly looking for wildlife sightseeing. 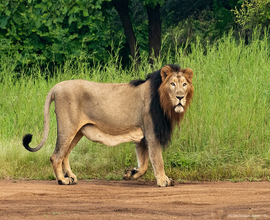 Sasan Gir National Park was a part of the princely state of Junagarh back in the 19th century and a hunting ground for the royal household and the British officers. However, the sudden drop in the lion population encouraged the Nawab of Junagarh to establish the sanctuary in 1965. Today, Gir Forest is the only place in Asia where Asiatic lions can roam freely. Ecotourism is a major attraction and a source of revenue to keep the place up and running.

The Gir Lion Reserve, aka Sasan Gir, is part of a huge stretch of Kathiawr-Gir deciduous forest and home to the majestic Asiatic lions. The park, spreading over an area of 1413 square Kilometres is ideal for a weekend gateway, offering guests great accommodation options near the park. You can spend your days exploring the Gir jungle trail safaris, spotting lion cubs roaming about the area, and learn more about the amazing wildlife conservation work that is done by the officers here.

Other than the rich biodiversity and tourism, the Sasan Gir forest is also known for its elaborate water conservation systems. Gir is the meeting point of seven major perennial rivers- Hiran, Shetrunji, Datardi, Shingoda, Machhundri, Godavari, and Raval. There are four water reservoirs constructed on four of these rivers Hiran, Machhundri, Raval, and Shingoda. The Kamleshwar Dam, dubbed, ‘the lifeline of Gir’ is the biggest dam in the area. Plus, there are water points or small lakes constructed all over the landscape for animals to gather during the scorching summer months to quench their thirst.

Other than that, there are also plants like Dhavdo, timru, umro, simai, Simal, khakro, Kalam, Vad, Amla, Bamboo, Ber, and Saliacan here. The forest is shady with broad-leaved deciduous trees like casuarinas and Prosopsis that add on to the aesthetics of the place. Scientists and biologists are also conducting research in and around the area, discovering new species, harvesting methods, and actionable environmental conservation techniques.

The endless stretch of deciduous forest in the Gir National Park is the only place in Asia where you can find Asiatic lions roaming around freely in all their glory. However, the dense forest is not just home to these majestic carnivores but a host of other species and insects that make the place vibrant and diverse.

Established in 1965, this wildlife sanctuary was earlier a hunting ground for royal families and British officers. Today the area is one of the most extensive wildlife conservation sites in the country. Back in 1913, there were but 20 lions in the forest, the 2015 consensus shows a vast improvement in the situation with the population rising to 523 lions. Here are some of the animals that you can come across on your trip to the Sasan Gir Forest:

Other than lions, you can also find herds of deer, leopards, hyenas, jackals, elephants, mongoose, and other mammals on land. There are two types of deer species found here- the popular Sambar and Chowsingha, the four-horned antelope. Striped Hyena, jackals, and India Fox are other common predators.

The Gir National Park is house of over 200 species of birds- ranging from common swallows to majestic peacocks. The national park also functions as a bird reserve, a title that was declared by the Bird Conservative Network. Bird watchers from across the world come over to the forest to spot species like the greenish yellow-footed pigeons, Griffon Eurasian vulture, hawk, eagle, Indian Pitta, Oriole to name a few.

As soon as you enter the forest, the chirruping of crickets greets you, piercing the stillness of the jungle. As you move on, you might come across other small creatures like worms, butterflies, bugs, grasshoppers among other things. There are over 2000 species of insects that were discovered by scientists in the past few decades. We would recommend that you carry a bug spray, carry jackets, and other medication with you to protect yourself from allergic reactions and skin inflammation.

Other than insects and birds, the Gir national reserve has a decent population of reptiles as well. There are roughly 37 new species of reptiles, ranging from frogs to snakes and scorpions and bees that researchers have discovered in the area. However, it is the marsh crocodile that steals the show, attracting tourists in large numbers. Snake lovers would be thrilled to discover species like the King Cobra, Russel’s viper, Krait, and saw-scaled vipers in the forest.

Gir has a tropical monsoon climate, with three distinct seasons – summer, monsoon and winter. Late November to early March is cool and dry, followed by a hot dry summer. Mid-June to September is the monsoon period. The bulk of the precipitation is during July and August.