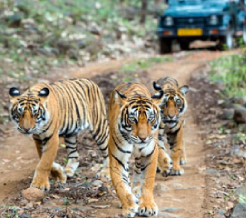 from Rs 5000 Per Person on Twin Sharing
Details Book Now

Kanha National Park, a marvelously conserved and picturesque wildlife reserve in the deep forests of Madhya Pradesh, is one of the most visited National Parks in India. It is an immensely popular Tiger Reserve, attracting tourists from various parts of the country. In late-19th century, 1879 to be exact, the area in the central highlands of the state was given the status of reserve forest. Due to its rich biodiversity, the value of the Park increased to conservationists and administrators, as it was uplifted to the status of a sanctuary in the year 1933.

Finally, in the year 1955, the region was declared as a National Park. Currently, the administration of the Park is under the Forest Department of Madhya Pradesh. One of the interesting facts about the Park is the flora and fauna of the region inspired the Nobel-laureate author Rudyard Kipling to pen his famous book – The Jungle Book.

There are primarily 3 categories of forests dominant in Kanha. One of them is the Sal forest of Moist Peninsular nature. The other two forest categories are mixed deciduous, typical of Southern Tropical nature, of both moist and dry varieties.

There are numerous varieties of big trees that you can witness in Kanha. For example, you could see the Sal, the Lendia, Palas, Bija, Bamboo, and Mahua trees in abundance, when you avail Kanha tour packages. Besides all these big trees, there are also several types of climbers in the Park. You could also spot different wildflower plants in the region.

Several water-bodies are in the periphery of the Kanha National Park. Locally, they are called ‘TAL’. It is a short form of the term ‘TALAB’, which means – pond. During winter months, migratory birds from various countries arrive at these water-bodies, and make the Park their abode temporarily.

Proper management of forest resources in the recent year has enabled a better conservation of precious materials such as fodder and timber. Local authorities also implement plans to arrange for fuel wood, and conserve the sources accordingly. Over the years, various flora species have contributed to the economic prosperity of the region.

Undoubtedly, tourists visit Kanha National Park due to its richness in several kinds of faunal species. The supreme attraction is the majestic Bengal Tiger. Wildlife enthusiasts and professional photographers regularly visit the Park availing Kanha wildlife packages, magnetically pulled by the aura of tigers in the region.

Besides tigers, there are other animals living in the Park, in well-balanced natural habitats. One of the important animals is Barasingha, the enormous deer species with huge branched-out horns, which you can witness availing Kanha adventure packages. You can also see sloth bear and Ratel in this region. Palm civets and Indian civets could also be found here. There are other big cats such as leopards living in Kanha jungles. Spotting jungle cats is also not an uncommon affair.

There are animals from the canine family, too. For example, you could witness hyenas, wolves, wild dogs and jackals, when you avail Kanha sightseeing packages. There is also the exotic Indian flying fox residing in Kanha forests. Spotting wild boars is also a common thing.

Big-sized animals such as Gaur and Nilgai are aplenty in the Park. If you are interested in spotting uncommon animal species, then the biodiversity of Kanha offers you such scopes, with its pangolin and pipistrelle population, in Kanha affordable packages. Samba deer, mongooses, and Langurs also reside in the Park.

While purchasing Kanha family packages of the National Park, it is quite important to know about its climatic conditions, throughout the year. Kanha National Park experiences a huge variation in weather conditions, as far as temperature levels are concerned. The climactic category under which Kanha falls is tropical.

The summer months are very hot. Traveling in these months could be very uncomfortable. Highest temperature can reach to a level of 43 degree Celsius. Even in nigh time, the temperature remains in thirties. The level of humidity is moderate during summer months, which generally span from April to June.

Kanha also receives a fair bit of rainfall during monsoons. Rainy season usually begins from mid-weeks of June, and extends till September. The average annual rainfall that Kanha receives is about 1800 mm.

Winters are really cold and harsh in Kanha National Park. The temperature level cal drop down to 2 degree Celsius. There might be frosts in some of the meadows at higher altitudes of region. The onset of winter is in mid-November. It continues till the month of February. When you plan to visit the Park during this time, you need to arrive well-prepared with your winter garments.

You should have information about the period for which Kanha National Park remains open to tourists. The Park is open from October 15, and it remains so till June 30. Hence, it is no possible to visit the Park during the monsoon months. You have to plan the tour sometime in winter and summer months.

The ideal time for you to avail Kanha holiday packages would be months between November and March. The weather conditions are very comfortable during this time. You would really enjoy exploring the Park, and visiting its various corners. Weather is cool, rather cold, during daytime.

In March, there is soothing pastoral breeze gently sweeping through the Park. If you have a special interest in bird-watching, then you could visit the Park in March. This is the time when the Park becomes livelier with chirping of several species of birds, of various sizes. On the other hand, if you have a keen interest in watching migratory birds, then you can visit in December and January.

As a tourist solely interested in catching glimpses of the biggest cat family members, you can target the months of April and May. This is the time when tigers and leopards come out of deep forests, more.

How to Reach Kanha National Park

You don’t have to go through any trouble to reach Kanha National Park. All you need to do is plan a bit, choosing any of the transportation modes to reach the destination. Also, keep in mind the budget of the tour.

By train: Jabalpur Railway Station is only 160 km away from the Park. You can reach there by train. After reaching Jabalpur, you can hire private car services to go to the Park. You can also reach Raipur from any major city and rent a car from there.

By road: There are several routes to reach Kanha if you want to take the roadways. One of the routes is from Jabalpur. You can drive to the destination from here. The other is from Raipur. You can also rent a car from Bhilai, Bilaspur and even Nagpur, for reaching Kanha National Park. The time to reach the Park would vary from 4 to 7 hours, depending on the location from which you have rented the car.

When you are chalking out a plan for your Kanha National Park itinerary, then you can consider including the following places under your plan, in order to spice-up the tour even further.