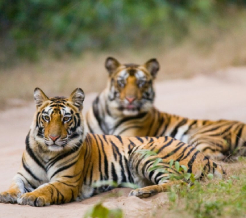 from Rs 6000 Per Person on Twin Sharing
Details Book Now

Bandhavgarh National Park has a rich history, associated with the flourishing medieval city of Bandhavgarh. The term BANDHAV means brother or friend. GARH word means fort. So, the overall meaning is Fort of a brother / friend. The name of the National Park is derived from this term. The fort is considered to be one of the marvels of ancient ‘Treta Yug’ period. The Baghels were the main rulers of the region in the medieval era for the longest period.

When the Baghels shifted capital city of their kingdom to Rewa, the Bandhavgarh region was somewhat cut-off. The region was later developed into a thick forest habitat for wild animals, mainly tigers. It was soon declared as a game reserve for the Royals.

As years passed by, rules shifted through various focal points, and ultimately in 1968, the State Government got the rights of the land and the forest. In the year 1982, it was declared a National Park. After 11 years, in 1993, the Park became a Tiger Reserve under the scheme of Project Tiger.

The region of the National Park is regarded as the greenest part of Umaria district. The higher hills in the Park are covered with tall grasses. The Park has a dense forest of predominantly Sal and Bamboo trees, which you would witness in Bandhavgarh wildlife packages.

The number of flora species in the Park is more or less 300. The rivulets and streams flowing in the Park help greenery to flourish further. You can also spot Tendu and Arjun trees in the forest. The region is also known for trees such as Palas, Salai, Mango and Jamun. There are also Babul, Banyan, Khajoor, Kadam, and Madhuca trees. You can also find tree varieties form contrasting vegetation such as Neem and Mohua, while enjoying Bandhavgarh affordable packages. Moreover, there are 1336 species of endemic plants in the region.

The number of species of mammals in Bandhavgarh National Park is at least 22. There are also 250 bird species in the Park. The main attraction is of course the kingly beast – The Royal Bengal Tiger. The Park is one of the best known Tiger Reserves in the world.

The wide spectrum of faunas found in the Park is quite impressive. Besides Bengal tigers, there are also White tigers that are even rarer species. You can also spot leopards, and jungle cats, from the cat family. Sloth bears, grey mongooses, Gaur and Barking deer are some of the common species. Getting a glimpse of a striped hyena during Bandhavgarh adventure packages is also not uncommon.

If you are an ardent bird-watcher, then Bandhavgarh safari tours give you a huge scope to nurture your passion. From common peafowl, doves, parakeets to black vultures, egrets, and Indian rollers, you can spot lots of interesting bird species in the Park.

The climate of the Park varies throughout the year, significantly. During winter months, which begin from mid-February and extent till March, the nights have nearly freezing temperatures, at 1 to 2 degree Celsius on certain occasions. The daytime temperature hovers around 15 to 20 degree Celsius, and you would enjoy availing Bandhavgarh family packages during this time. The tropical weather conditions in the Park make the summer nights cooler than usual – in mod-twenties in degree Celsius. The days are dry and hot, and the temperature is in mid-thirties. The summer season is from March to June. The Park remains closed in monsoon.

It is practically useful to know about the best time to avail Bandhavgarh holiday packages, so that you can plan the tour in a more organized manner. For visiting Bandhavgarh National Park, choose anytime between mid-October to June. You would get lots of opportunities in a standard Bandhavgarh National Park itinerary to see the royal beast, the tiger, in this time period. Also, there would be no issues in getting glimpses of various other faunas. If you love holidaying in chilly winter months, then you can plan the tour during December to February. Note that tourists are not allowed during rainy season.

How to Reach Bandhavgarh

By Road: Bandhavgarh is nicely connected to all major cities and towns in Madhya Pradesh, like Jabalpur, Satna etc. The roads are in good conditions. From Jabalpur, it would take a 4-hor drive to reach Bandhavgarh National Park. If you plan to visit the place from Nagpur, Maharashtra, the drive time is approximately 9 hours.

By Air: Jabalpur Airport is the nearest airport to the Park. It is about 200 km from your destination. You would get lots of transportation options from the airport.

There is no dearth of beautiful spots in and around the Park, and you can check the places out in Bandhavgarh sightseeing packages. Some of them are mentioned in the following points:

Baghel Museum – It is museum where you would see all kinds of possessions of the royals from the bygone era. There are hunting equipments and antique items on display.

Tala Village – While availing Bandhavgarh tour packages, you can nurture your interest to take a closer look at simple and modest village life by visiting Tala located in the vicinity of the Park.

Mahaman Pond – It is also known as the ‘Place of Quench of the Thirst’, where various animal species come to drink water.

Kethika – It is one of the loveliest spots in the Park, adorned with different species of wildflowers. There are lots of Arjun trees here.

Climber’s Point – Visiting the Climber’s Point on a weekend getaway tour will let you have an aerial view of a large area of Bandhavgarh National Park, and its impeccable beauty.

Adventure trip on a hot air balloon – On a weekend trip, you can rent a hot air balloon, the latest adventurous attraction in Bandhavgarh. The skyline of the town, with a beautiful vista, would be open to you. The experience is incredibly enthralling, as you gently float above the clouds, feeling cool breeze.

Bari Gufa – The literal meaning of Bari Gufa is ‘Giant Cave’. You would see ancient structures and inscriptions inside the cave, which dates back to ancient times.

Three Cave Point – It is yet another engrossing spot in the Park that enables you to see the ancient architectural marvels of the region, and also gives you a scope to have glimpses of many animal species.

Shesh Shaya – It is an 11-meter tall Lord Vishnu statue, in the posture of ‘Shesh Nag’, along with Lord Shiva and Lord Brahma.

Cheshpur Waterfall – It is a mesmerizing waterfall in River Johila, about 50 km away from the Park, which you can visit in Bandhavgarh weekend tour packages.