How To Reach Gir National Park From Kolkata?

Due to absence of any direct flights between Sasan Gir and Kolkata, the fastest way would be boarding the flight. You can take a flight from Kolkata to reach Mumbai and then take another flight that takes you to Rajkot.

Home
/
Blog
/
How To Reach Gir National Park From Kolkata? 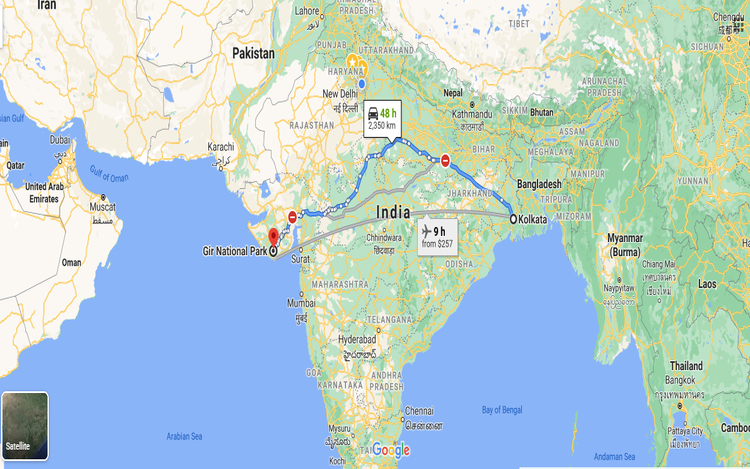 After reaching Rajkot you can hire a vehicle to reach the National Forest. a convenient option would be reaching Gir by taking a flight from Kolkata to Ahmedabad. On reaching Ahmedabad, you can take a vehicle on rent to make it to Sasan Gir. However, out of the two, if you are considering a cheaper option then you can take a train to reach Rajkot and further hire a cab to reach the reserve. The distance between Sasan gir and Kolkata is about 2411 km, while the aerial distance is 1839 kilometers only.

The Expenses That Would Be Incurred

If A Flight Is Board

When you take a flight from Kolkata to reach Ahmedabad, expect to direct flights. However, you can always reach Ahmedabad from Kolkata and then further take a can to reach Gir. The entire duration of the trip would be about ten hours thirty four minutes. You may have to shell out anywhere between seven thousand to eight thousand rupees.

If A Train Is Board

Again, there are no direct trains between the two points. You can choose to take the BDTS Bhuj Express from the city of Ahmadabad to Malia, after reaching via flight from Kolkata. On reaching Malia, you can hire a cab that takes you to Gir N.P. The entire duration of the trip is twelve hours thirty seven minutes. You may have to shell out around rupees five thousand three hundred eighty eight.

If A Bus Is Board

Undoubtedly, there is not any direct bus that can take you to Gir from Kolkata. This is because the two points are located at extreme locations of the west and east respectively. All you can do is take a flight from Kolkata to reach Ahmedabad then take a bus to reach Junagadh from Ahmedabad. Later, from Junagadh, you can reach Sasan Gir. You may have to shell out around rupees three hundred to four hundred as bus fare.

Both Kolkata and Gujarat face the sun’s wrath in the summer months. Hence, it would be a wiser idea to make a trip to Gir during the summers because you do not have to face the sizzling heat wave. During summers the animals can hardly be seen as they stay under shelter trees and this is why they may not be visible at all times. Winter thus, serves to be the best time for your viewing pleasure. Mild weather makes it easier for animals and you can spot them easily. Try taking the jeep safari. Browse through our wide range of Gir Jeep Safari Packages with accommodation. Best pricing available for Gir Hotels & Resorts.

Click to know the full range of Wildlife Tourism in Gujarat